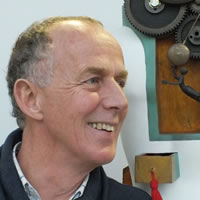 Richard Atkinson-Willes studied at St Martin’s School of Art in the late 1970s. In the face of a tradition of formal steel assemblies produced by such luminaries as Anthony Caro, Philip King, David Annersly and Mike Bolus, Richard experimented with polychromed wooden constructions. Questioning the validity of the mainstream he rose to the challenge of progressing his work from the popular genre of crafted sculpture to the more intellectual realms of the concept object, where a sculptural idea is realised without the constraints of a formal process or recognised tradition.

Challenged by the awakening of the British conceptual art movement, which reached its peak with Damien Hirst and the betes noirs of Goldsmiths College in the late 1980s, his work has emerged as not just another new fashion, but as a serious attempt to combine the strengths of British sculpture since 1945 into a style which truly reflects its achievement.

He has developed a career in teaching and arts project administration but remains dedicated in making, developing and showing his unique sculpture.