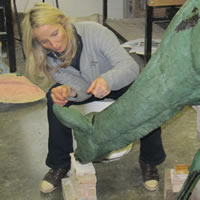 Tessa Campbell Fraser was born in Edinburgh in 1967, and spent her childhood in the Scottish Borders.

Having studied at Chelsea School of Art, she established herself through the late 80s and 90s as one of the country’s leading equestrian and landscape artists, winning many awards and exhibiting work at the Royal Academy Summer Show, Sculpture at Goodwood, the Royal Institutes of Oil, Watercolour and Pastel Painters respectively, and solo shows at the Natural History Museum, London and the Tryon & Swann Gallery, Cork Street.

From 1996 her interest in animals and anatomy led her to focus on sculpting. She has since completed several major bronze commissions, including a group of life-size guinea fowl, three half life-size elephants, a life-size Highland Stag, and, in 2003, three life-size hippos.

In 2001 she was elected an Associate Member of the Royal Society of British Sculptors. She was made a Fellow of the Society in 2004.

Tessa’s paintings and bronzes are held in private collections including those of Her Majesty the Queen, HRH Prince Fahd Salman, the Household Cavalry and Knuthenborg Safari Park, Denmark, as well as in Australia, South Africa, Monaco and the USA.