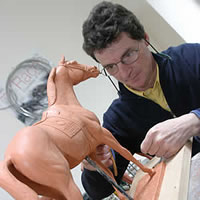 One afternoon in 1972, the sculptor John Robinson, came to my school (Hazlegrove in Somerset) to help a small group of us make clay figures. I was twelve years old. The effect of John’s teaching was, for me, truly inspirational. It was as if a light had been switched on. I felt totally at ease and complete in what I was doing and, from that moment on, I knew that one day I would be a sculptor.

In 1977, following a year at Art School, I went to work for a racehorse trainer in Wiltshire. I had ridden from an early age and the idea of becoming a jockey really appealed. As luck would have it, I rode a winner on my first ride. Two years later, following a spell in Ireland, I took out my professional license.

Over the following years, I rode a handful of winners each season, but sadly did not make it to the top ranks as a National Hunt Jockey. I see this period of my life as a sort of apprenticeship for much of what I do now, for I was always thinking about sculpture and, although I loved riding horses, I found myself spending more and more time in my studio. Drawing upon my experience as a jockey, I made many small equine studies, most of which ended up in the bin. However, some were cast and sold to fellow jockeys, trainers and owners. I also made a series of bronzes for the company, Glen International who were heavily into race sponsorship at the time.

For every jockey, there is a last ride; mine was in a novice hurdle at Chepstow in 1987. Having its first run, the horse ran well finishing third and, at the time, I felt frustrated that my racing days were over but the decision was made and a new and exciting phase in my life was about to begin.

Jockey, Steve Knight, had won the Grand National that year on Maori Venture and he kindly introduced my work to Jim Joel, who liking what he saw, asked me to make a bronze study of his National winner. Two months later, Steve Cauthen won the Derby on Reference Point; he too liked my work and commissioned a bronze of himself and his Derby winner cantering to the start. The Derby was to play an important factor in my career ten years later, but for now these two high profile commissions together with other work that first year, set the seal on my future and I have been a full time sculptor ever since.