Sculptor Anna Bromiley has been at the foundry working on Hope, the last of three sculptures for the new garden of St Mary’s School, Calne. Here she explains how Faith, Hope and Love came about.

How can a sculptor capture the spirit and beauty of a Calne girl? Well, quite clearly, they cannot but what they CAN do is capture their own impression of a Calne girl. So, nine months ago I set out to do just that.

Anna Bromiley in the Lime Kiln Garden with Faith 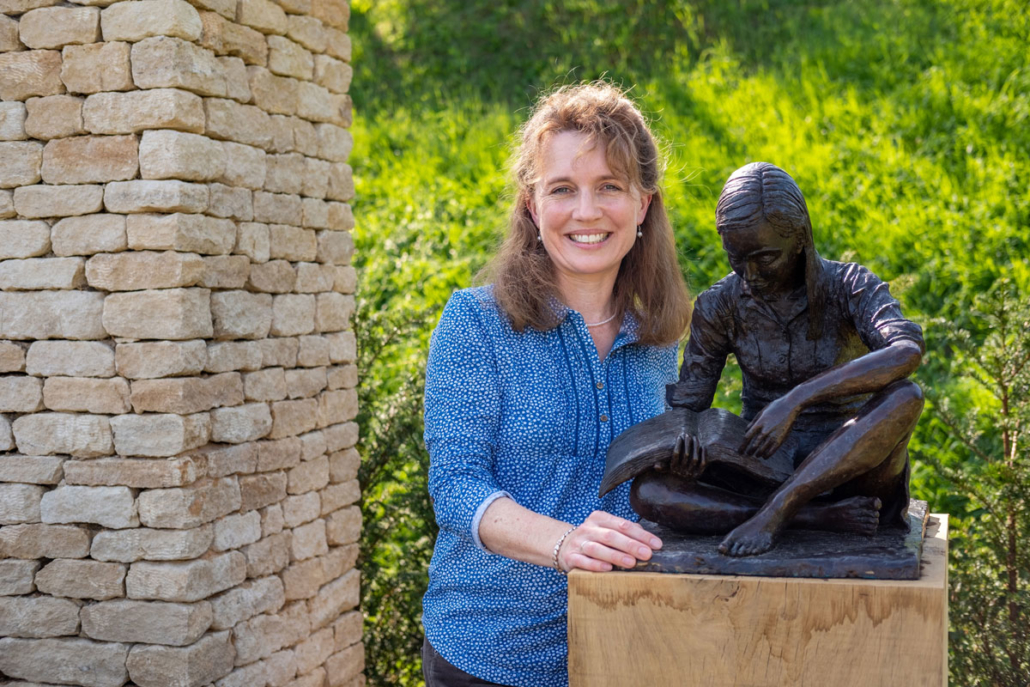 It all began last winter when St Mary’s Director of Development shared the vision for the new Lime Kiln Garden. Designer and St Mary’s parent, Sally Harley-Martin, had left three spaces for sculptures. Would I consider making a sculpture for the garden? Of course, it was an honour to have a sculpture in such a beautiful garden, in such a fabulous school.

After much research, thought and a tour of the garden in its construction phase, I noticed a reoccurring pattern of threes: The three lily flowers in the school emblem, the three founders of the school and the three fates found embedded in the school grounds. But, in wanting to honour the vision for the founding of the school, the most important trio had to be the values of faith, hope and love. These are Christian symbols with a universal relevance that speak of the human condition, appealing to all faiths and those with none. 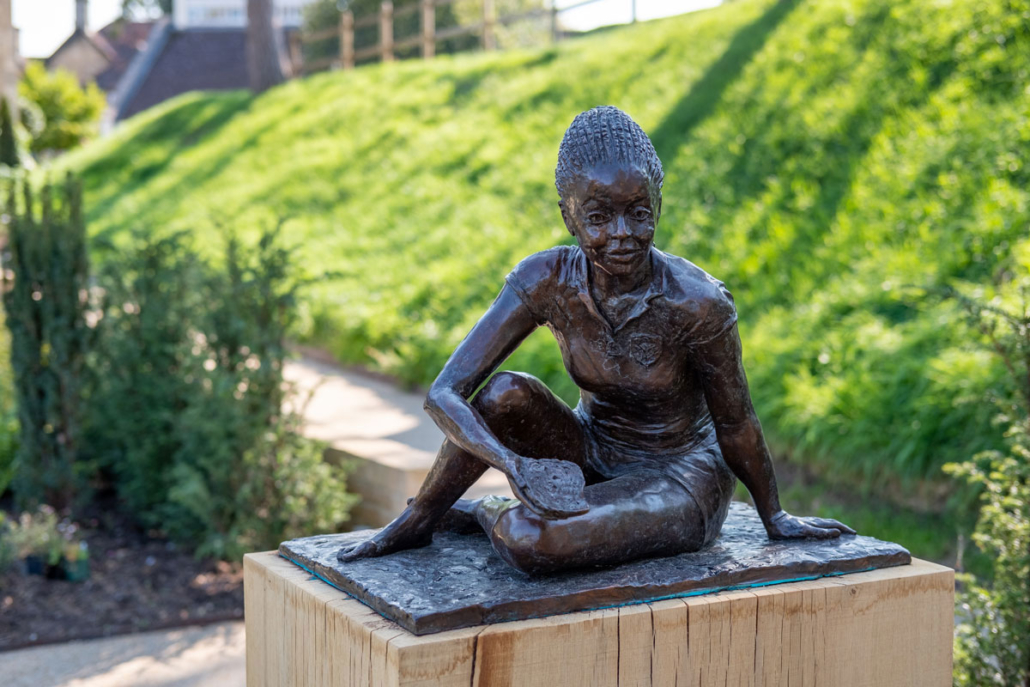 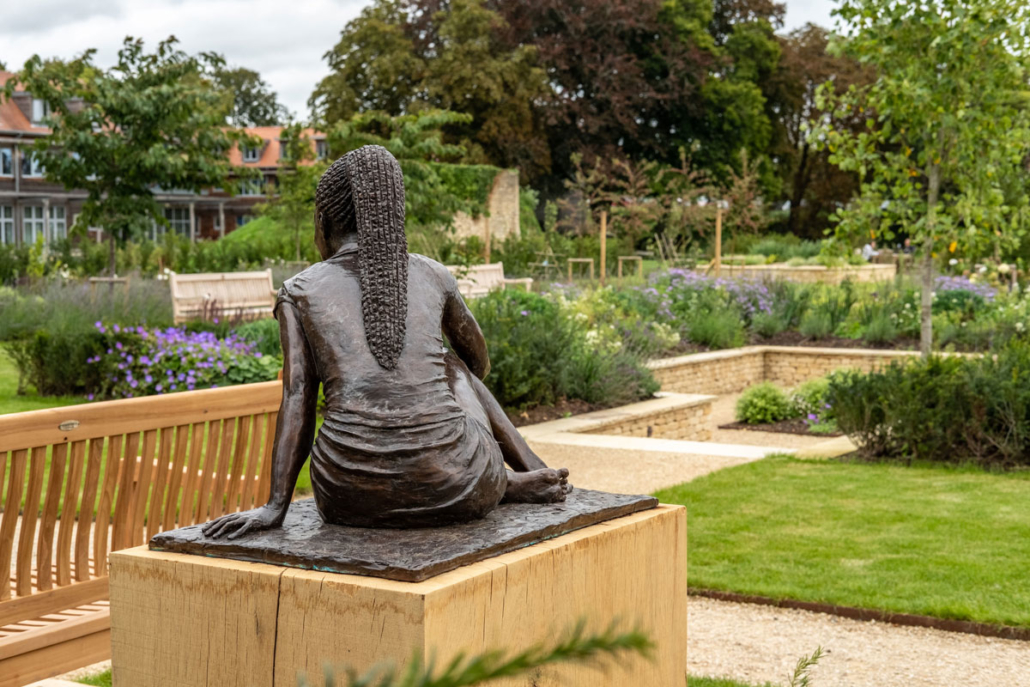 There are several symbols for each of these. For Love I decided on the symbol of a basket of bread, which I adapted to a girl offering a slice of bread. This, it was felt (especially by my daughter) was more representative of a Calne girl than a mother and child as sharing breads and spreads seems to be more of a priority at this stage! To me, this showed some of the everyday kindness I have seen amongst the girls.

For Faith I chose a bible. A St Mary’s girl with her nose buried in a book seemed in keeping with the academic ethos and culture of the school. Also, it tied in with the expertly engraved Cicero quote that highlights the importance of intellectual curiosity.

Lastly, an anchor is a symbol of hope, as is a dove. When looking at the garden, I could almost see Boccioni’s ‘Unique Forms of Continuity in Space’ striding forward. I wanted to reflect this confidence in a sculpture of a girl boldly walking out into the world and towards her future. Not only holding hope for herself but being the bearer and giver of hope.

Sketches and maquettes of my ideas were presented and given the thumbs up and in March the creative process began….how exciting! Perhaps at this point the enormity of the project dawned on me!

Models! We needed models. After asking the sixth form, we were very excited to have plenty of volunteers and I wish I could’ve sculpted them all. So the three girls were chosen by pulling names out of a hat.

After meeting with them I decided which pose would suit each girl. As time was of the essence, sculpting began the following week. We decided bronze was the best material being both beautiful and long-lasting. Talos Art Foundry needed at least three months to cast them, giving me until the end of April to sculpt them. I needed to pull out all the stops!

What a treat it was to come into St Mary’s to work! The staff and girls make it such a delightful place to be, everyone couldn’t have been more helpful.

On seeing the finished bronzes for the first time I cried. These sculptures represented a culmination of emotion stemming from the complexity of lockdown and having to improvise with models no longer being available. The sheer relief that came from having completed a work bearing the weight of representing the ethos and heritage of such a wonderful school community was tangible. It has been my honour and privilege to contribute to St. Mary’s in this way.

Anna is married to Philip Bromiley, Team Rector of the Avon Valley Team (near Salisbury). Their daughter has just left St Mary’s Calne, after 7 years, to study Theology at Durham.

30 Talos artists in the Open Exhibition

Rose Lewis 10 statue of a 10 horse
Scroll to top